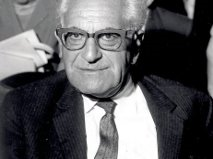 It has become common knowledge that Adolf Eichmann, the architect of the Holocaust,  was captured by Mossad agents in Argentina and brought to justice in Israel. But hardly anyone is familiar with the fact that it was a German Jew, the Hessian attorney general Fritz Bauer, who provided pivotal information about Eichmann’s whereabouts in South America to the Israeli authorities. Join German Historian Anette Isaacs as she pays homage to Bauer, this true hero who confronted post-war German society with its guilt -and denial thereof- and who almost single-handedly initiated the Auschwitz Trials of the mid 1960s.