The New Germany-- European Leader with a difficult legacy!

80 years after the shameful Night of Broken Glass (“Kristallnacht”) generations of Germans are still grappling with their country's -and, in many cases, their own family's--horrible Nazi legacy. Join German Historian Anette Isaacs, M.A., for a fascinating discussion of how the German nation has attempted -- and is still attempting-- to cope with the guilt of having caused the Holocaust. 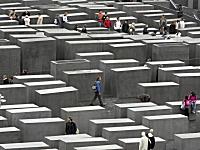