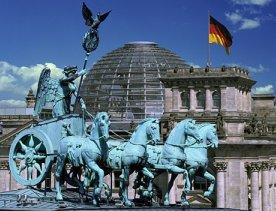 After a drawn out and turbulent election campaign the Germans went to the polls in September and elected a new federal government. But where does Europe’s most populous nation and its economic engine go from here? What do the election results mean for the European Union and for Germany’s domestic policies? How will the country and its legendary social net be transformed during the next legislative period? How will the new government bond with the Trump administration? Join German Historian and Political Scientist Anette Isaacs for an informative and enlightening post-election review!