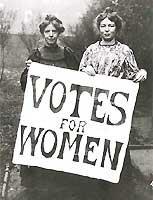 From Suffragettes to Angela Merkel: German Women Yesterday and Today

(celebrating 100 years of Women’s Right to Vote in Germany)

Did you know that until the late 1950s a West-German husband was allowed by law to end his wife's employment contract if he felt that her job was interfering with her "duties in household and marriage"? In the past five decades German women have indeed come a long way: Emancipation has reached Europe's most populous nation full force, Germany is governed by a female Chancellor, and the "Hausfrau" truly seems to be a relic of the past. Join German Historian Anette Isaacs, M.A. as she discusses the changing roles of women throughout the 20th century and as she shares her insights into what it is like to be a woman in today's German society.